Maui is watersports territory. Although celebrated as one of the best windsurfing spots in the world, it also offers an abundance of great opportunities for surfers, “SUP”-ers, snorkelers and scube divers (why do all watersports start with an “s”?). Since I tried windsurfing with modest success when I was in Maui last time eight years ago, we concentrated more on the other alternatives.

When I refined my skills to catch some nice waves, Anne discovered her fun in stand up paddling (“SUP”). This relatively new watersport is like surfing but you stand on the board with a paddle in the hand. This position allows you to have a nice view over coming waves and underwater stuff (a good thing considering the widespread shark paranoia here). And with the paddle it is much easier to catch the waves and steer. I tried the sport three years ago in California in calm waters and it was no lasting memory. However, doing the same in the world class Hawaiian waves and warm waters I see the sport differently. Oh my dear, have we been washed in the waves. Two to three meters are enough for us and when we see the crazy guys riding the ten plus meter waves in Peahi (“Jaws”) and their broken surfboards, we are happy to sit safely on the beach.

And what would be the best soundtrack for this? Of course the legendary Beach Boys (“Surfin’ U.S.A.”). Luckily they were just having a live concert a couple of days ago in Maui. The perfect match and great atmosphere open air amongst palm trees and beneath a stary sky. However, the old fellows have never been known for the quality of their music and mastering of their instruments. Most of the grey heared hippie audience did not realize (or bother) when the Boys sang “Fun, fun, fun” in the wrong tonality for a while.

Being on the water is fun. Being below the surface is amazing. In the last twelve months we have been diving in New Zealand, Australia, Thailand, Indonesia and Djibouti. We have seen some of the best diving spots in Komodo and Bira, swam with whalesharks and did some awesome sub-tropical dives. When we arrived in Hawaii, I desperately wanted to go under water, mainly because I heard some great stories and did not have my diving certification when I was here last time. So, we took the first boat in the morning, maneuvered through jumping humpback whales and arrives at famous Molokini outerwall at sunrise. What could one wish more than 50 meters of visibility, constant whale song music and great sealife. Think of the biggest frogfish you ever saw, surreal harlekin shrimp, rare tiger snake eels, tiny Hawaiian lion fish and color changing octopus. Oh, and by the way we have seen some whitetip sharks as well.

Stand up paddling here without any waves

Is this also water sports?

Our view from the jacuzi

Trying to catch some waves 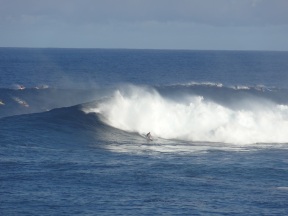 Peahi – Jaws (no, it’s definitely not me)